Samsung has launched an app to help those with amyotrophic lateral sclerosis (ALS) communicate.

Also known as motor neurone disease, ALS is a degenerative disease that affects control of the muscles needed to move, speak, eat and breathe. People with ALS can reportedly spend an average of €40,000 ($48,000) per year managing the disease.

In partnership with the Spanish startup Irisbond and the Luzon Foundation, Samsung recently unveiled TALLK, a free-to-download app that allows people to write and voice their thoughts via eye movement.

Using a Samsung tablet’s camera, TALLK works by tracking a user’s eye movements which it translates into text using a virtual keyboard and artificial intelligence. The words or phrases are then articulated by Samsung’s voice assistant, Bixby. 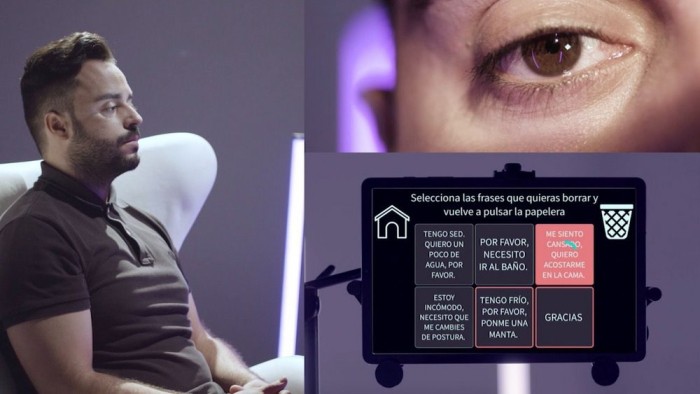 The app uses algorithms to bank stock phrases that can be quickly accessed to save time. Compatible with 15 different Samsung tablet models, the app is only available in Spanish although the company says it plans to expand the number of languages soon.

The electronics brand recently promoted TALLK in a video campaign created by its agency Cheil Spain, Madrid. At the moment, a reported 35 ALS patients are using TALLK.

Technology With Purpose / This initiative is part of Samsung’s ongoing strategy of using technology to improve people’s lives, while also relating it directly to its products. The South Korean multinational is on a mission to show that its products are more than just cold hardware – they have the power to tackle some of the world’s toughest challenges and help people overcome seemingly insurmountable problems, including those related to health conditions and disabilities. In the past, we’ve reported on the brand’s tablet app that helped people with autism enter the workforce as well as another app that adjusted its TVs to support the colour-blind. In a similar fashion, this ALS initiative, which allows people with reduced mobility to talk, reinforces the brand’s commitment to improving people’s lives through its relatively affordable consumer devices.

‘Samsung’s innovation is about helping people make meaningful progress in their lives. As time goes on, the real innovation is becoming less about physical products and much more about the user interface and the software,' Chris Chalk, president, and Europe chief strategy officer at Cheil Worldwide (Samsung’s main agency) told Contagious in a previous interview.

Brand love / ALS affects as many as 30,000 people in the US, with 5,000 new cases diagnosed each year. The seriousness of this incurable disease means that Samsung’s technology will be viewed in a very positive light by a wider audience beyond those with the disease. This helps the brand connect with consumers on an emotional level, building affinity and differentiation in an increasingly competitive consumer electronics sector. Samsung’s competitors include giants such as Apple, Xiaomi, LG Electronics, Sony, Huawei and HTC to name but a few. As we reported in our Brand Spotlight, Samsung may be the world’s largest smartphone manufacturer, but that doesn’t mean it can rest easy at the top. It can only remain one of the most profitable companies in the world if it contin­ually raises its game. ‘Complacency is the enemy of progress’ is the motto that has steered Samsung’s operations for years. With this campaign, Samsung manages to address a real-world issue and take another step forward in its transformation from an engineering company, doggedly pushing the frontiers of innovation, into a much-loved brand that fosters emotional connections.