Rock Gas Wellington’s Facebook post states that "LPG is a fantastic fuel for heating and cooking and offers lower carbon emissions than other energy options.” The ASA had to assess whether this was true, what did they decide? 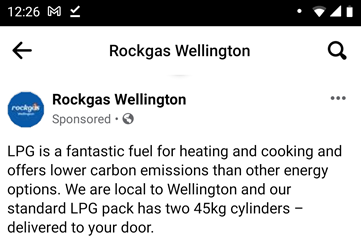 Rock Gas Wellington’s Facebook message attracted complaints on the grounds that LPG is a fossil fuel energy source with higher carbon emissions per unit of energy than most energy sources used in commercial and domestic environments, such as natural gas or electricity.

The company said it had removed the ad prior to the complaint being received and committed that any future messages would be worded to remove any ambiguity around lower carbon emissions of LPG compared to some other energy options. There was evidence to substantiate that LPG has lower carbon emissions than some of the alternative options.

The actions of Rock Gas meant the issue was declared settled, with no further action taken.