Only 1.45% of online ads served to children are for HFSS foods

Only 1.45% of online ads served to children are for HFSS foods

It is increasingly commonplace for public health officials globally to speculate that children are being “bombarded” with online advertising for high fat, salt and sugar (HFSS) foods and beverages to such a degree that this “bombardment” must be driving high rates of child obesity. Those who make these statements tend to overlook data that would undercut this “bombardment” hypothesis. In reality, available data would suggest that child exposure to HFSS advertising online is extremely low, even when one defines “HFSS” very expansively.

For example, a 2019 analysis commissioned by the UK government concluded that children under 16 were exposed to just 13.2 seconds (0.22 minutes) of HFSS advertising per day online[1]. A 2017 review by the European Commission using passive metering of children’s activities online found similarly low exposure of only around 4 HFSS ads per day[2].

Now, an independent study, using “avatars” that mimic children online, the same technology as employed by regulators in Europe and the UK for similar reviews, has corroborated these results on a more global scale and found that very few ads for HFSS foods and beverages are being served to children online.

The study, which was commissioned by WFA, was conducted by independent research firm Nielsen using avatars that mimic the real browsing behaviour of children online.

Conducted across 12 major markets including Brazil, Spain and Japan, The Digital Avatar Project found that marketing of HFSS products forms a tiny fraction of the digital advertising served to children online. A total of 30,593 ads were analysed, captured by the child avatar visiting 100 URLs per market over a period of three weeks in October 2021.

The key findings of the study, which used a definition of “HFSS” based on the Ofcom regulatory model in the UK, are:

These findings serve as a reminder that, though it continues to be important to ensure that child exposure to HFSS advertising remains quite limited, we have already come a long way. WFA works together with the International Food and Beverage Alliance (IFBA) towards reducing children’s exposure to HFSS, in line with the United Nations mandate to the private sector. The IFBA policy was recently updated and mandates that chocolates, candies/confectionery, potato crisps, soft drinks and ice creams cannot be advertised to children under the age of 13. 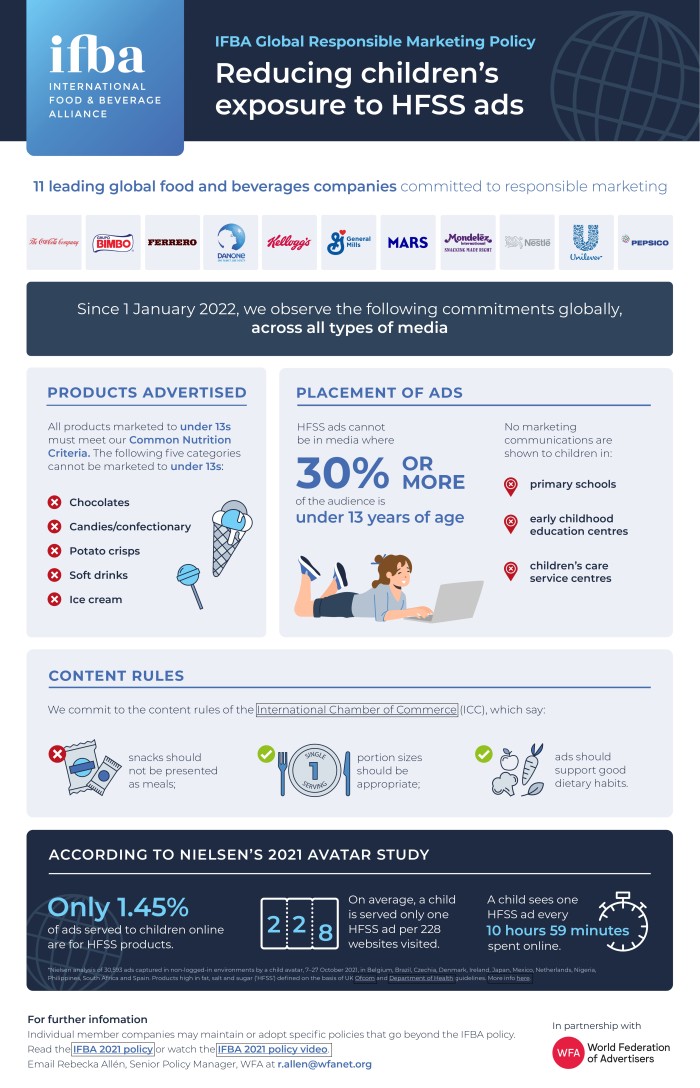 A high resolution version of the infographic can be downloaded by clicking here.

The study employed four simulated consumer profiles, also known as avatars: Child Under 12, Teenager 12-17, Adult 25+ and Neutral. The media universe was formulated as a mix of sites and YouTube channels popular with – and having content/genre affinity with – teen and child audiences, as well as generally top-ranking sites and channels, to achieve a simulation of the average browsing habits in each country. Only non-logged-in environments were covered by the study.

Each of the four avatars visited 100 primary URLs across both desktop and mobile devices, with a randomly selected subpage also monitored. This created 1,600 hits a day per country. The study ran for 21 days between 7th and 27th Oct 2021, resulting in a total of 33,600 hits per country, for a total of 403,200. The total number of ads captured by all avatars is 121,232.

Nielsen bases its HFSS classification on the same model employed in the UK by regulator Ofcom. However, certain product categories such as yoghurt and breakfast cereal, some of which meet the Ofcom criteria depending on their exact nutritional composition, were automatically classified as HFSS. This resulted in a slight over-representation of HFSS ads vis-à-vis the Ofcom model. It should be emphasized that the Ofcom model itself is just one among many definitions of HFSS foods.

Summary report of the Nielsen study can be downloaded below.

[2] See page 202 of  Study on the exposure of children to linear, non-linear and online marketing of foods high in fat, salt or sugar, published on 8 July 2021, which found that children were served 117 HFSS ads per 28 days.