A visual in an ad for coffee brand Lavazza attracted a complaint to the Jury for Advertising Ethics as it appeared to suggest that drinking the brand would aid planet protection. Their verdict is here. 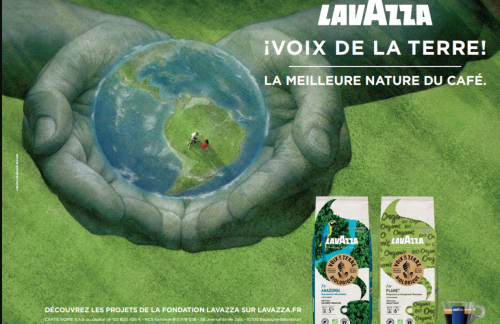 Coffee brand Lavazza used a poster ad to promote its "Voice of the Earth" coffee in France. The advertisement featured two joined hands holding a globe. A couple enjoying a coffee is shown on the Amazon and in the bottom right-hand corner, two packets of organic Voice of the Earth coffee are shown with the words "For Amazonia - Supporting Reforestation" and "For Planet - Responding to Climate Change" respectively. Consumers could also "discover the projects of the Lavazza Foundation on lavazza.com".

The Jury considered that the visual representing the globe, in the centre of which appears the Amazon, between two protective hands to suggests that the consumption of the promoted coffee would favour the protection of the planet.

Without ignoring the many sustainable development projects supported by the Lavazza Foundation, the Jury considered that the visual was disproportionate to the ecological impact of the production and consumption of the product and broke the ARPP's "Sustainable Development" Recommendation.