Aeroméxico – the country’s biggest flight carrier – wanted to encourage more Americans to travel to Mexico. To boost flights to the country, the airline decided to challenge American perceptions about Mexico.

Working with Ogilvy Mexico City and Ogilvy Bogotá, Aeroméxico offered discounted flight tickets to Americans who could prove their Mexican heritage by taking a DNA test.

In the online video for the DNA Discounts campaign, people from Wharton, Texas, a ‘typical American town’, are asked whether they would travel to Mexico. Even though some of the respondents admit to liking burritos and tequila, they insist that Mexico is not a destination they would consider. One man interviewed in the film even says: ‘Let me stay here in peace and let those folks stay on their side of the border.’ However, the interviewees’ perspectives soften considerably when they hear that they have some Mexican heritage in them and are therefore eligible for a discount.

Aeroméxico based its discounts on the percentage of a person’s Mexican ancestry. For example, it offered a 22% reduction in price for an American with 22% Mexican heritage. 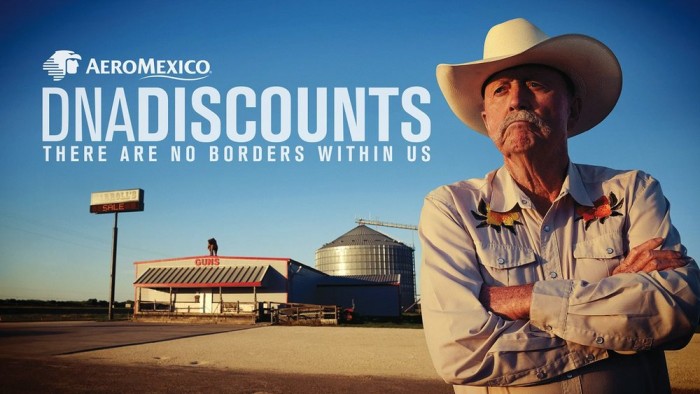 In addition to discounts offered to the subjects of the online film, the brand offered discounts at its partner travel agencies in Texas, Colorado, Utah and Nevada, and 54% of customers tested in these states had Mexican DNA.

Although the ad was released in May it went viral in January 2019, racking up more than 900,000 views on YouTube. The campaign was also picked up by major news publications including the Financial Times and CNN.

Results / When we spoke to Ogilvy about the campaign, the CSO told us: ‘The campaign video got 23,404,089 views in just a week on different platforms, achieving a total of 1.6 billion impressions. People all over the world were talking about the brand’s campaign: journalists and activists (Denise Dresser, Ian Bremmer, Qasim Rashid, Kevin Sieff) entertainers (Ted Allen, Rachel Rudwall, Edith Brou), and even the former President of Mexico (Felipe Calderón) addressed the campaign. Important opinion leaders like The New York Times, Time, Newsweek, Daily Mail, CBS, ABC, CNN, Forbes, Fox News, Fast Company, Business Insider, and USA Today all referenced it.

‘The brand was mentioned in 166 countries, with a total of 141,177 mentions on social media and digital platforms like Youtube, Twitter, Instagram, Tumblr, etc. Searches of the word Aeromexico on Google increased by 17,778%, and searches of ‘vacation to Mexico’ in the US increased by 322%. People were talking: 326,298 people shared the video on their own timelines, it wasn’t because of something they didn’t like, but of something people respected and believed in, and that showed in the fact that negative sentiment towards the campaign was only 4%, which is really low number compared to what airlines are used to.’

Update 22/03/19: For more on the insights and strategy behind the campaign, read our interview with Ogilvy Bogotá.

Talking politics / Though there are no direct references to politics in Aeroméxico’s ad, there’s still a strong political subtext. This comes through most obviously at the end of the video, with the message: ‘There are no borders within us.’

It’s telling that the ad went viral not when it first came out but in January 2019, when the US was in the midst of the longest partial-government shutdown in the country’s history, in part because of President Donald Trump’s demands to fund a wall along the US-Mexico border. The campaign must also be viewed in the context of Trump’s history of anti-Mexican rhetoric, including referring to people from the country as ‘drug dealers, criminals and rapists’. Although it is taking a light-touch approach to politics, Aeroméxico is getting attention because it’s dealing with an important topical issue.

It is worth pointing out, however, that though the video makes the point that Mexicans travel to the US more than Americans travel to Mexico, Mexico is still the number one foreign destination for US travellers. Not only that, but Trump’s Mexican-bashing hasn’t seemed to deter tourism. Mexico’s Secretary of Tourism told CN Traveler last year that US visits to Mexico grew about 11% in 2017 and tourism has been steady in the past few years.

Aeroméxico has refused to comment publicly about this campaign, but it has a history of engaging with politics. In 2016, the brand released Borders, a powerful piece of creative in response’s to President Trump’s border wall announcement.

For more on how brands are navigating political issues, read our trend.

Changing perceptions / This campaign from Aeroméxico is just one of a slew of recent examples that we’ve seen from brands using DNA testing to prove a point. In 2017, Jigsaw’s employees posted information about their heritage on social media as part of a pro-immigration campaign, while travel company Momondo used a similar mechanism to tackle xenophobia.

When we interviewed Ørnulf Johnsen, planner at the agency behind the Momondo DNA Journey campaign, he said that, ‘According to the psychology behind brands and marketing, if you actually make someone do something, rather than just making them feel something or hear something, then the message comes through in a much more genuine and longer-lasting way.’ In Aeroméxico’s campaign, as in Momondo’s, having people actually undergo DNA testing is a strong and effective means to imprint the message in their minds.

Matching Aeroméxico’s discount to the percentage of a person’s Mexican heritage adds a playful twist that makes the campaign a talking point for a broader audience. While not everyone will have the opportunity to take the DNA test, they will know what Aeroméxico stands for.