How a financial institution played on a cultural insight to rebuild the credit histories and promote the financial inclusion of thousands of women in Mexico.

In January 2021, WeCapital, a financial institution that works to promote the financial inclusion of low-income women in Mexico, launched an initiative designed to restore the credit histories of thousands of women.

According to the brand, 83% of Mexican women have no credit history, which blocks their access to bank loans for studying or starting a business. In order to rebuild the credit histories of low-income women and grant them access to the financial sector, WeCapital teamed up with DDB Mexico, Mexico City, to tap into the millions of unofficial credit records kept by shopkeepers throughout Mexico.

It’s common throughout Latin America for women to take out weekly or monthly store credits – the shopkeeper makes a note of each item a customer buys, and when they pay up. The problem with these records is that they are not recognised by the national financial information centres, leaving women without proof of their spending behaviour.

In an initiative called Data Tienda (Data Shop), WeCapital tapped into the accounting records of shopkeepers throughout Mexico, collecting the information from neighbourhood businesses and using it to build credit histories. Women could sign up on the datatienda.mx platform, where they were prompted to provide records from between five and 10 shopkeepers.

Once vetted, the shopkeepers’ records were converted into official credit histories. By December 2021, more than one hundred women had received their first microcredits for their businesses, and the scheme was expanded from Mexico City to other major cities, such as Puebla, Guadalajara, Morelia, and Monterrey.

Results / According to the agency, more than 10,300 women have registered to build their credit history since the launch of the platform, over 2,300 women have received microloans for their businesses and study plans, and Data Tienda has captured data from more than 50,000 business owners across the country. The campaign was also awarded the Grand Prix in the Creative Data category at Cannes Lions 2022. 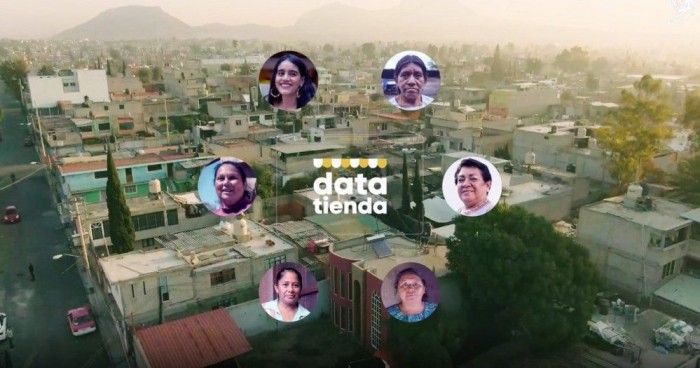 To find out more about how Data Tienda aligns with an existing behaviour and what it took to put together, Contagious caught up with DDB Mexico president Juan Isaza, who told us: 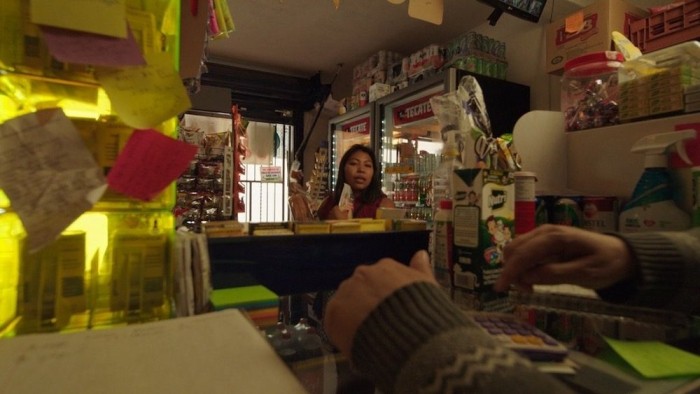 Did WeCapital come to you with a specific brief for this campaign?

Juan Isaza: They were looking for a campaign to support women or help society, rather than a commercial goal – although it was seen as a business opportunity for them, as they are dedicated to giving small and medium companies credit. WeCapital wanted to capture more credits and develop the business among low-income women.

What was the idea for the campaign?

During the briefing session, something that caught our attention was that there are not many financial institutions giving money to women. When we started asking the reasons why, it was a paradox, because women pay better than men. That’s proven. And women are much more organised and focused on how to use their money. However, it’s very difficult for them to get credit because they don't have a credit history. So that was the origin of everything. Then we started saying, rather than trying to create a campaign, what if we were able to create a credit history for them?

Where did the insight come from to rebuild women’s credit histories?

The insight came from an understanding of the problem. Often when we do projects for clients, we get [given] the wrong problem. And here, the problem was not that women have no access to credit. If we did a campaign based on that problem, we would probably saying something like, WeCapital trusts in women and we will give you credit.

99% of Latin America is based on a notebook.

Is that cultural insight of the shopkeepers keeping the unofficial accounts in their notebooks specific to Mexico?

It's something that you see all over Latin America. The way it works is: women ask store owners for credit on everything they need. So, at the start of the month, they'd say, ‘I need milk, I need oil,’ whatever. They take it and the shopkeeper writes it down in a notebook. We discovered during the project that it could be as informal as a piece of cardboard or a box. Or we found some [shopkeepers] who actually had a small very basic computer.

It's a broad type of way of keeping a record; 99% of Latin America is based on a notebook. Store owners keep monthly or weekly records, women receive their salaries, they pay all the money they have spent, and they start a new credit the next month. That's very common all across Latin America.

That's why our ambition is to take this to other countries – we already have contacts with Guatemala. There’s a company there that is interested in developing this. We also presented the idea to an NGO that works to promote women’s entrepreneurship. They operate in four or five countries in Latin America, and WeCapital is open to offering the platform to other countries and institutions.

We discovered that there was a use for that data, which was proving that those women can pay.

The beauty of this idea is that it seems very simple from the user’s perspective. Was it simple to convert that analogue data into digital records?

It's simple for the shopkeeper – they only have to go on a link and go through multiple selection options, and it takes less than two minutes to provide the credit recommendation. They have to prove that they own a shop – it's not like women can go and ask five friends to provide a recommendation.

Was difficult to develop? Yes and no. The initial idea was that the shopkeepers could take a picture of their notebooks, and artificial intelligence could make some sense of the data. But when we started doing the fieldwork, we proved that that was impossible, because no two records were the same. So that part was a little bit complicated.

We also spent some time with lawyers, defining how to manage this data legally. That’s why the process starts with the woman because she has to authorise us to collect that data about her. But it is a very simple idea. Many people from Latin America have told me, ‘This is brilliant, because we’ve always seen those notebooks in the corner stores, and no one had thought about how we can translate that data into something usable.’ And we discovered that there was a use for that data, which was proving that those women can pay.

We know this isn't something for everyone, but at least that low level of the pyramid has a resource. 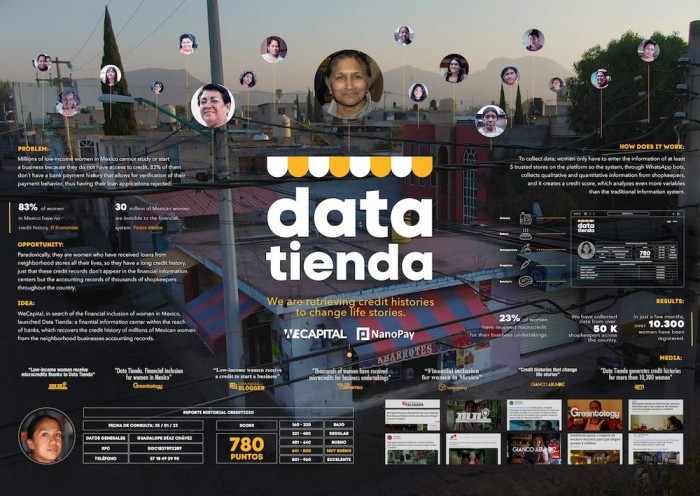 Did you receive any resistance to the idea? If this is how the system has always worked, aren't some people set in their ways?

Some people [to whom] we presented this idea said that it had limitations in terms of the number of people who could access it. At some point, when a woman has a mobile phone with a contract or utilities in her name, there is an algorithm that starts building a prediction of her ability to pay.

So one head of a big financial institution in Mexico said, this could work at the very low level of the pyramid, for someone who has nothing in her name, but most women are building their credit history, even if they haven't borrowed any money. So we know this isn't something for everyone, but at least that low level of the pyramid has a resource.

How did you launch and then roll out the project?

We started with a pilot in Iztapalapa, one of the poorest areas in Mexico. We wanted to test it with shopkeepers to see if it worked and we also talked to women and asked if they'd use it and authorise their data, and we got an incredible reception. So we began in WeCapital's areas of influence. And then, in Mexico, there are these cars that have a speaker on top of them, and they go through the streets promoting and announcing products.

So people listen to that, they go outside and they buy and trade products. So we used that same system, announcing [the initiative] and asking women to get at least five shopkeepers to help them and we started growing that way. That was pretty much the main medium we used – what we call in Mexico 'perifeneo', which is basically communicating through a speaker.

This initiative has the potential for real long-term impact – what's next for the campaign?

Women are using it and we've seen more than 3,000 women have had their credit history consulted. WeCapital has opened up the [platform] and at least one other financial institution is using it now. So short term, [the goal is to] keep growing in Mexico, and long term, taking this to other countries in Latin America, starting with Guatemala.

What's been your biggest takeaway from the campaign?

When people ask me how this campaign started, I say this campaign didn't start with a client briefing. This campaign started way before that: a year and a half ago when I became president of DDB Mexico. The agency had a lot of issues in the past, in terms of discrimination, and not being a very good working environment. When I started, I said my objective is to make this the most inclusive and most diverse agency in Mexico. I'm gay myself and I've suffered from discrimination for many years.

Now, it's quite different. We have advanced a lot. So [we decided that] 50% of our vice presidents have to be women. I created a certification called Best Place to Work LGBTQ+, I started a programme to promote the hiring of women in creative departments and developing them as creative directors. We just started training people on how to hire people with disabilities. So my main learning from all of this, is that when you create diversity inside the agency, you see diversity in the product, inclusion in the product and in the type of ideas that the agency is producing. So I learned that I was not crazy. This is something that really works.