A first-timer might feel slightly overwhelmed by the scale of the Cannes Festival of Creativity – 15,000 delegates from around 100 countries travel to the French Riviera every year.

But there is another festival that’s just as impressive in figures and growing every year: the China International Advertising Festival. It was in Haikou, the capital of China’s island province Hainan in the South China Sea, that the 23rd edition of the festival took place from 21 to 24 October, bringing together 20,000 people. 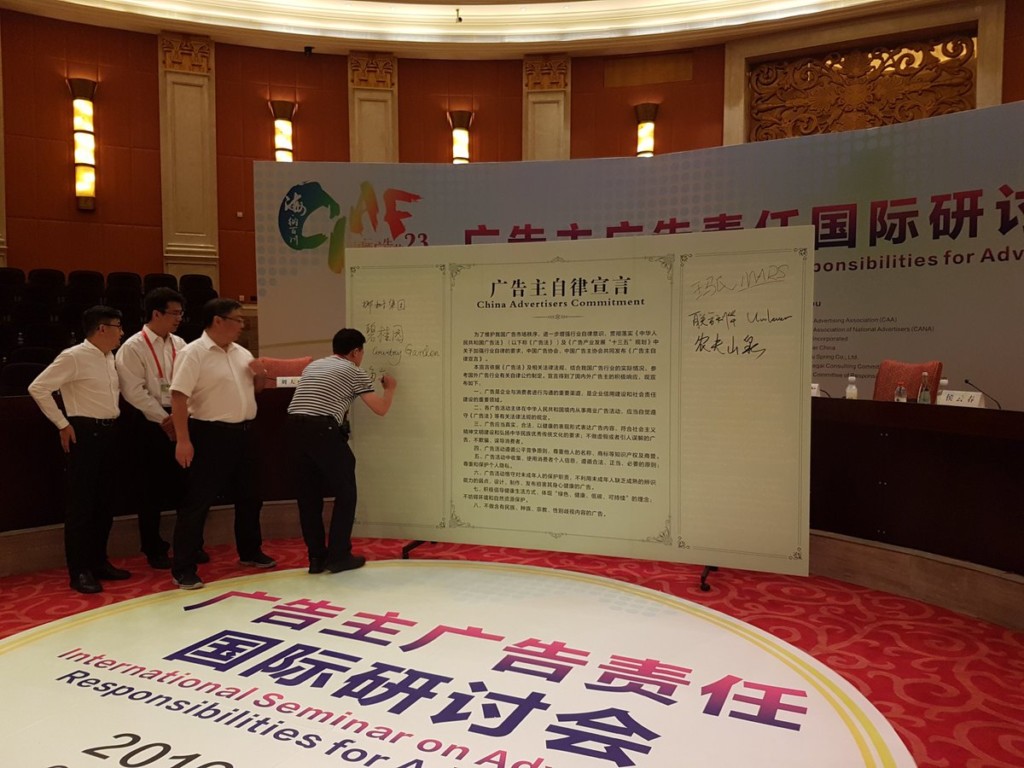 It was against this backdrop that the WFA attended a high-level seminar on ad standards organised by the China Advertising Association (CAA) and our Chinese national association CANA on 22 October; an opportunity for the WFA to continue the conversation started earlier this year in Marseille and discuss advertising standards and plans to set up a self-regulation system in China with key government and industry stakeholders.

Here are a few takeouts from the meetings in Haikou:

#1 Advertising pays off: In Europe and North America, making the case for advertising as a force for good – benefitting consumers, powering the economy – can be challenging. In China, the government is one of the industry’s strongest advocates and a driving force behind our industry. Advertising is seen as an engine for innovation, growth and jobs.

#2 Jack Ma and Alibaba are China's modern day heroes. Standing for innovation and success, self-made billionaire Jack Ma and its e-commerce business Alibaba are the incarnation of China's newly-found confidence. It comes as no surprise then that regulators are keen to shape a regulatory framework that will catalyse the growth of e-commerce.

#3 Self-regulation gets traction. Overly prescriptive regulation might stifle the growth of digital and Chinese regulators understand that. A case in point is the new milestone reached on 22 October, when the Chinese ad industry adopted the "2016 Advertisers Commitment" in the presence of Vice Minister Gan Lin of the State Administration for Industry and Commerce(SAIC) – the state administration that oversees advertising in China. The text is largely inspired by the key principles of the ICC Code of Advertising and Marketing Communication Practice and the plan is to revisit and strengthen it gradually, in particular to include a section on food marketing to children.

#4 The "new normal" is still quite exceptional. The Chinese government anticipates that growth rates will cool off at around 6% annually. In a world economy which is growing at 3.5%, that's the sort of dynamism many countries can only dream of. Having spent two days at the International Advertising Festival, I'm very impressed by the quiet confidence, the appetite for innovation and the sense of optimism of the Chinese ad industry.

#5 And one more thing... Don't travel to the South China Sea during the typhoon season. It took me 31 hours to get from London to Haikou City. And I managed to catch a return flight just ahead of the next typhoon.

For more information about WFA’s work on promoting and strengthening advertising standards contact Will Gilroy, Director of Public Affairs, at w.gilroy@wfanet.org