Spanish ad industry publishes manifesto for the future of advertising

Spanish ad industry publishes manifesto for the future of advertising 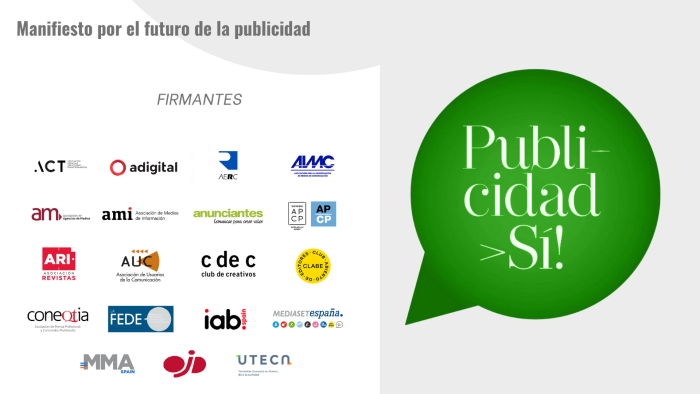 The “¡Publicidad, Sí!” (“Advertising, Yes!”) Platform, made up of the Spanish Association of Advertisers (AEA) and 18 other industry organisations, released a manifesto on the future of advertising.

In the manifesto, the industry calls for an urgent dialogue with the Spanish government to discuss and collaborate on building a more balanced and modern regulatory framework for advertising.

According to AEA research, advertising represents 1.3% (18.7 million Euros) of Spanish GDP and provides more than 100,000 jobs in the country. The decalogue of the manifesto also mentions other important points about advertising activity in the country, including that:

To continue exercising its beneficial role in the economy and in society, the signatories of the manifesto believe that advertising requires fair regulation that places the industry at the forefront of innovation. With the industry in a process of digital transformation, advertising rules need to reflect these changes.

“If we want the advertising sector to continue adding value to the Spanish economy and being an engine for job creation, we need regulation that allows us to continue growing,” explained Lidia Sanz, AEA Director General.

The “¡Publicidad, Sí!” Platform is a cross-industry initiative that brings together different stakeholders in the Spanish ad industry to promote the social and economic importance of advertising.

In February, WFA published an open letter with the support of EACA (European Association of Communication Agencies) and EGTA (Association of TV & Radio Sales Houses), AEA other industry associations representing the Spanish ad industry to highlight the value of advertising to the economy, society and consumers. The letter expressed a common concern at a growing tendency in the country to disproportionately regulate marketing communications at a time when the Spanish economy seeks to build back from the pandemic.