New research shows how embracing diversity in content delivers better results. Will Gilroy from the WFA and Daren Poole from Kantar outline the latest data.

There are a host of groups that the advertising industry has historically ignored. Sadly, many are still an afterthought for many brands.

The irony is not just that many of these groups have huge spending power – older groups have literally trillions of dollars to spend every year, for example – but that they also represent a huge growth opportunity across almost every category. 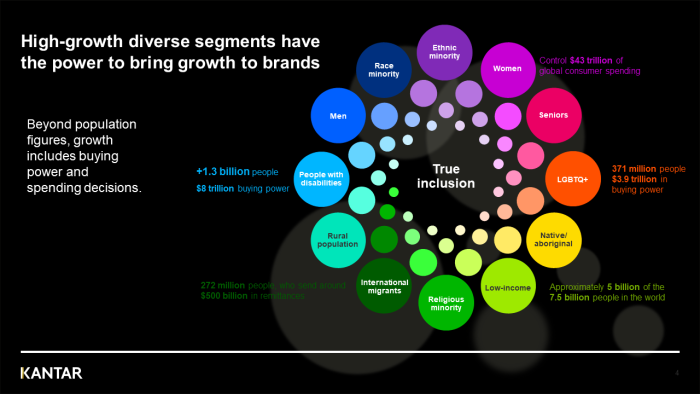 The list of ignored groups is huge; old people, those with disabilities, LGBTQI+, people of colour or from different ethnic groups. And that’s before you start to consider the issue of gender – 50% of the population – that has traditionally been stereotyped or ignored in many categories.

As the WFA embarks on the industry’s first ever global census of diversity and inclusion – please participate here – it’s worth exploring the business benefits for brands when it comes to getting their external communication approach right.

New research from Kantar shows that those who do heed the need to show human life in all its glory perform better. But success depends on doing more than tickbox casting or putting these groups up in the background.

For real improvement in performance, brands need to give these groups a real role, to portray them fairly. Analysis of Kantar’s Link database, which tests more than 10,000 ads from around the world every year, reveals that what makes a difference.

Ads that feature underrepresented groups but just give them a presence have almost identical average short-term sales uplift and improvements in Power– the potential to contribute to longer-term brand equity – as those ads that don’t.

However, when ads that feature underrepresented groups in a positive way, there is a huge difference in the potential to build the brand in the longer term and also better potential to influence short term sales.

The scale of that difference is enormous: an increase of 45 points for the long-term Power metric and 23 points for short term sales lift.

When we follow through to examine the longer-term impact of positive portrayal, it also grows over time. Tests for Impact – a measure of engagement and potential to be noticed – found that while diverse representation improved performance by 18 points in 2019, it was improving scores by 26 points in 2020.

This huge difference in performance has been identified using the Unstereotype Metric, created by the Unstereotype Alliance, which asks consumers to rate ads on the basis that: “This advertising presents a positive image of the female/male character(s) that sets a good example for others”.

This enables Kantar to create a progressiveness percentile, benchmarking performance with other ads tested in the market. By then comparing the top quartile of Unstereotype Metric scores to those in the bottom quartile across all the TV and digital ads that were tested between January 2019 and March 2021, we can identify the difference in performance. 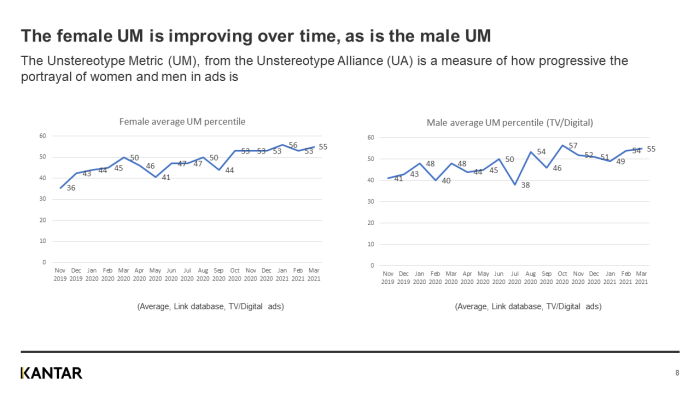 Analysing those brands that are doing this right identifies three different ways to benefit from this ROI improvement.

First, they can cast inclusively, in a way that goes beyond presence and ensuring that underrepresented groups play a central role in a brand story that isn’t focused on inclusion and diversity as a topic. Ads with this approach often show people in slice of life situations where they previously haven’t been shown, thus recognizing their everyday experience.

Second, brands can choose to tell stories that revolve around an underrepresented group’s identity or experience to communicate a brand message. In other words, these stories are only possible because of who is in them. This can be a powerful vehicle to convey different groups’ experiences to a broader audience while also landing a brand message.

The third and last approach, is inclusion as purpose. This is when a brand aims to tackle stereotypes about particular groups and trigger social change through advertising and beyond. To do inclusion as purpose authentically, a brand must show commitment to purpose not only through its advertising, but also through its impact on the community it speaks about as well as its own employees.

Historically, lack of inclusivity in advertising may have stemmed from misplaced concern that “mainstream” audiences may not engage with characters that don’t look like them or share their life experiences.  This new data shows conclusively that this idea is bunk.

Using historically underrepresented groups doesn’t hold back advertising – in fact, doing it well adds to the power of ads.  What matters is whether people can empathise with the scenario and the characters shown.

However, it’s not necessarily people’s presence that will drive success, it’s how you show them. The use of stories that are emotionally powerful and that demonstrate empathy are key.

And it’s crucial that companies are true to what they stand for as a brand; people will see through any creative execution no matter how good if they try to be something that they’re not.

The bottom line is that inclusive equals better results, but only if you are also following all of the other rules of effective advertising.