Advertisers believe they are still getting great value from their agencies post pandemic, WFA research

Advertisers believe they are still getting great value from their agencies post pandemic, WFA research

Clients acknowledge the need to pay more for diversity and sustainability commitments, as value-based compensation continues its steady rise

Clients challenged on cost of digital work, which has increased by up to 50% 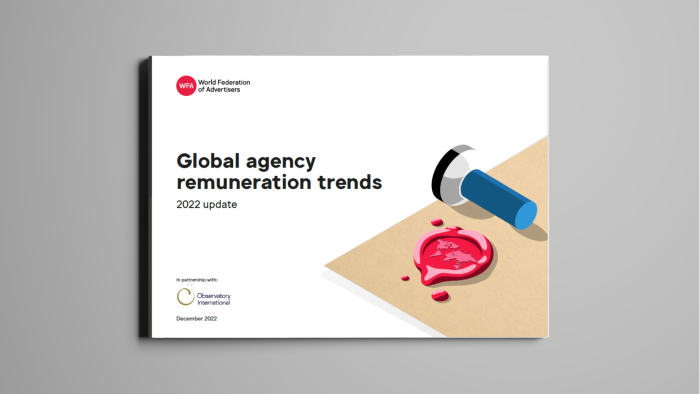 Major advertisers believe that their agency partners are still offering great value in 2022, according to new research from the WFA and strategic partner The Observatory International.

According to Global Agency Remuneration Trends, perceptions of value provided from relationships are up five percentage points since the last such study in 2018, to 17% among those agreeing “most strongly” with the statement “I feel that I am getting value for money from my agencies”. Compared to the WFA’s first such study in 2011, value perceptions – “agree somewhat” and “agree strongly” – are up 19 points.

Drilling down by agency type, however, value for money is regarded more sceptically when it comes to media agencies in 2022, with 5% strongly disagreeing that they are getting this. Anecdotal suggestions appear to indicate that a lack of original thinking and a habit of rolling out the same solutions year after year has led some respondents to question overall value (rather than performance).

Global Agency Remuneration Trends also reveals that the long-term trend for more payment terms based on labour and performance continues, with labour and FTE arrangements still dropping back. The former is up from 9% in 2011 to 22% currently, while the latter is down 54% points to 33% since 2011. In-house agencies tend to be rewarded based on FTE as staff are, of course, employees.

The study is based on responses from 200 senior executives, mostly in marketing procurement roles, representing 84 companies, with a total global annual ad spend of more than $136 billion.

More than four in 10 respondents have seen significant increases in prices for digital and CRM services, with anecdotal reports suggesting that these can be as much as 50% for digital and as high as 20-30% across Europe and the UK for particular areas of technology specialism.

Global Agency Remuneration Trends also suggests that many advertisers are also prepared to pay more to agencies that meet diversity, sustainability and talent targets. Across all three areas, there is a real desire to pay more for agencies that can truly differentiate: 64% for greater diversity, 71% for sustainability and a staggering 85% for best talent. Evidence for increased payment among Western clients is hard to find, however, and many expect action in these areas to become the norm.

One increasing area for performance models is influencer marketing, which had been typically on an hourly FTE model but is increasingly being remunerated on hard KPIs such as a commitment to identify and sign-up a specific number of influencers on behalf of a client over a set time period.

For the influencers themselves, KPIs now include their success at acquisition in driving web traffic, downloads and sign-ups, although these targets need to be negotiated from the outset and be agreed to by both parties.

“Ultimately the chosen remuneration model will dictate the type of relationships clients want to have with their agencies. A focus on outcomes instead of input enables agencies to become integral partners to a client's growth and performance, that’s why it’s great to see that more clients want to reward not just performance but also quality through sustainability, diversity, and talent,” said Laura Forcetti, Director of Global Marketing Sourcing Services at the WFA. “One caveat is that we too often focus on the model being used and the fee being paid. What matters is the whole remuneration ecosystem, including the speed of issuing POs and payment terms. Some advertisers have very complex systems and even if the remuneration model is attractive, it can be a real struggle for agencies to see the money in their bank account.”

Other key findings include:

“Considering the significant financial disruptions we have seen both during and post-pandemic, it’s reassuring to see that this report shows that, in the main there continues to be a balanced approach to remuneration. Given the global forecasts for 2023, however, it will be interesting to see if the status quo is maintained as pressures grow both clients and agencies,” said Stuart Pocock, Co-founder of The Observatory International. “The report indicates that some issues do persist – but post-pandemic there’s really no excuse not to get round the table and iron these out face to face rather than let them fester – especially when it comes to the fundamental issues surrounding value for money and transparency.”