With concerns about the economy in general and inflation more specifically rising worldwide, how should brands respond? J. Walker Smith, Kantar Knowledge Lead, shares his views.

Inflation has taken the world by surprise. In February 2022, Carmen Reinhart, Chief Economist at the World Bank, and World Bank economist Clemens Graf von Luckner charted the history of inflation worldwide during the 21st century. 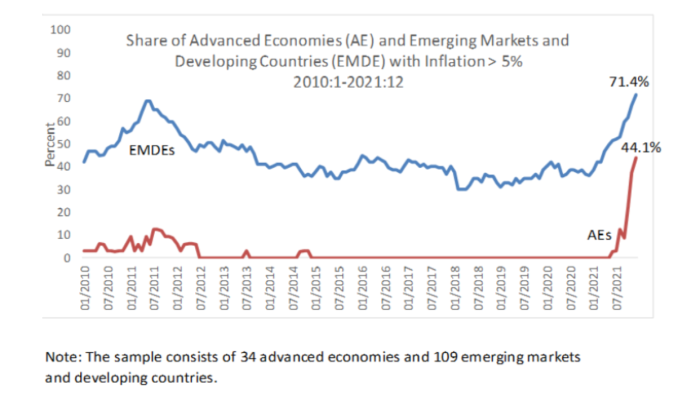 Over the past two decades, almost no advanced economies have experienced inflation above 5 percent, and for some, like the U.S., it’s been four decades. Only about half of emerging markets have experienced inflation that high. But during 2021, the percentage jumped to 40-plus and 70-plus percent, respectively. As Reinhart and von Luckner wrote, “the most salient feature of today’s inflation is its ubiquity”.

Since the 1980s, central banks have been laser focused on inflation. But the pandemic changed everything. Governments stepped in with generous support for households and businesses and interest rates were kept low to ensure the flow of credit. The net effect sustained consumer spending. With service industries all but inoperative, spending shifted goods like durables, home goods and technologies. But manufacturing and logistical difficulties have tied supply chains in knots, leading to high demand and low supply, thereby sparking a significant run-up in prices that has yet to ease off. The constriction of food and energy due to the war in Ukraine has added even more upward pressure on prices. And higher interest rates have made global financial markets brittle. For the foreseeable future, inflation will a challenge for brands.

Consumer reactions have varied widely. Kantar’s 19-market Global Issues Barometer (representing 68% of global GDP) found across three waves in 2022 (with another coming soon) that top-of-mind concerns about the economy in general and inflation more specifically are rising worldwide. In the most recent wave, 47% expressed concern about the economy and 31 percent mentioned inflation. 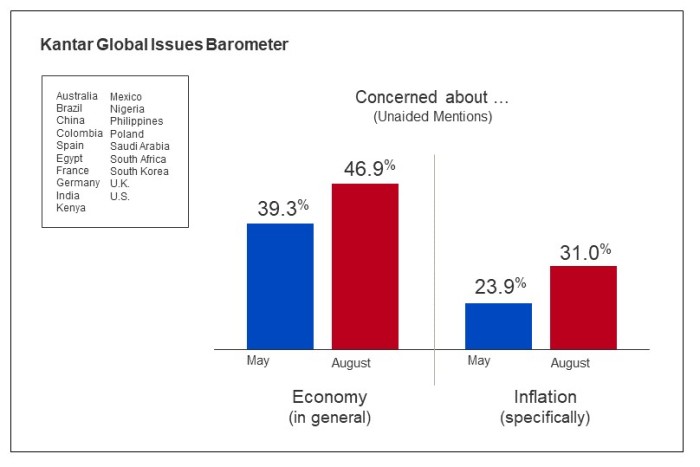 For the 5 European markets of the U.K., France, Germany, Spain and Poland, it was 58 percent and 47 percent, respectively, with concern far higher in the U.K. By contrast, in the U.S., top-of-mind concerns are down slightly from May to August at 44 percent for the economy and 30 percent for inflation. But whatever the level, a substantial percentage of consumers are concerned. So, brands must respond; three things, in particular.

First, brands must ensure that their prices and their value perceptions are aligned. This is critical during normal times, but especially important during inflation.

Kantar BrandZ, which tracks 19,000+ brands across 500+ categories in 51 markets worldwide, finds that only a small percentage of brands are properly priced at a “justified premium.”

More brands are over-priced than underpriced, which bites hard during inflation.

Beware of the discounting spiral

The second thing brands must do is build or maintain pricing power in order to avoid getting caught in a downward spiral of discounting.

The key to pricing power is difference. Over-reliance on promotions erodes a brand’s perceived difference.

Reframing value in terms of unique benefits and meaningful performance builds the power it takes to profitably weather inflationary pressures. Meaningful difference accounts for 94 percent of the pricing power commanded by a brand.

Taking the risk out of buying

Finally, brands must take the risk out of buying.

The current inflationary squeeze is unfamiliar to the generations that came of age after the 1980s, and it is occurring in the midst of other shocks roiling the global economy.

Public health authorities report record levels of anxiety and depressive disorders. This is seen as well in Kantar’s Global Issues Barometer, with over 60 percent feeling worried.

This is a moment of uncomfortable vulnerability for consumers, precipitated by the lifestyle adaptations brought on by the pandemic. Brands must allay any risk consumers might feel about shopping and buying.

The other side of the disruption coin is dynamism. Disruptions set off a dynamic cascade of changes that unseat incumbent business models and shift critical mass within and across categories. There are always opportunities for brands bold enough to invest during volatile times. This inflationary moment will be won by brands that can muster up the courage to grow.