Global Marketer of the Year 2017

Global Marketer of the Year 2017

WFA's Global Marketer of the Year 2017 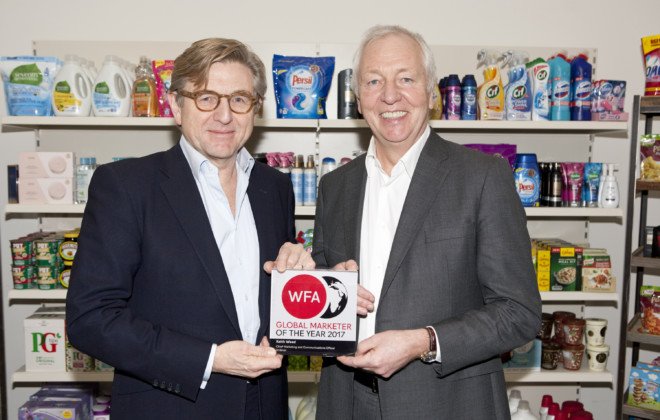 It’s an honour to be named as the first WFA Global Marketer of the Year. This is a wonderfully exciting time to be in marketing, and this award reflects the hard work and dedication of the whole team at Unilever.

The World Federation of Advertisers has launched the WFA Global Marketer of the Year Award to celebrate the role that regional and global marketers play in setting the course of our industry and inspiring others to be a force for good.

The inaugural award went to Keith Weed, Chief Marketing and Communications Officer, Unilever, who received the biggest number of votes from a shortlist of six leading marketers.

“A big congratulations to Keith on behalf of the global marketing industry. At a time when our industry is facing serious challenges, Keith has shown immense leadership. He is the purveyor of a portfolio of some of the world’s most purposeful brands, the architect of the Unstereotype Alliance and has been a pioneer in pushing for a better online advertising ecosystem,” said David Wheldon, WFA President & CMO RBS

Global Marketer of the Year 2017 candidates
We received several nominations which were considered by our expert jury who were asked to vote for their 6 preferred candidates from the full list of candidates.

Chaired by WFA President and RBS CMO David Wheldon, the 2017 jury included a wide range of sector and regional expertise, making it perfectly equipped to identify those who make the biggest impact on the global marketing business.

Whether it’s creating effective purpose-driven campaigns or demanding greater clarity in digital; whether it’s restructuring the way that internal and external teams work together or building a programme of media transformation that future proofs their business, great marketers can make a real difference.

Selecting the world’s best marketer is not a simple process because everyone will have their own opinion about what represents great. To make that easier, we’ve identified some clear criteria for “great” marketing as well as a clear process for making the selection.

This award is open to any client-side marketer in a senior global or regional position, who has worked for their company for a minimum of two years. Jury members should not be nominated.

To know more about the judging process click here.