Recent research from Lakeshore Foundation, a non-profit specialising in sports science for athletes with disabilities and a partner of Unilever-owned deodorant brand Degree, found that 81% of people with disabilities do not feel welcome in fitness spaces.

In response to the findings, Degree has launched #TrainersForHire, an initiative to improve representation in the fitness industry by encouraging fitness companies to hire trainers with disabilities.

Created with Edelman, New York, the campaign launched with a full-page ad in the New York Times, citing the Lakeshore Foundation’s findings and announcing Degree’s Trainers For Hire programme. The initiative is also being promoted through mobile, out-of-home, and an event (Tuesday 21 September) where American Paralympian Blake Leeper and other disabled athletes led pop-up cycling classes in New York City.

On the campaign website, visitors can find profiles of qualified trainers with disabilities, and email Edelman to apply to be a #TrainerForHire. There is also a free ally tool kit for fitness brands, companies or studios looking to make their space more inclusive or for individuals hoping to learn more about accessibility.

Degree has also partnered with NGOs from around the world as part of its Breaking Limits Programme, a $5m commitment ‘to empower millions of young people with the confidence and opportunity to move’ over the next five years.

To support the initiative, the brand released a spot called Watch Me Move, aired during the Paralympic Games. The 60-second film features athletes with disabilities, including professional surfer, life coach and adaptability advocate Bethany Hamilton, and highlights the fact that fear of judgement stops 46% of people from being active.

‘As a brand, Degree believes no one should be held back from experiencing the transformative benefits of movement,’ said Kathryn Swallow, global brand vice president at Degree, in a press release. ‘That's why we're fighting for a world where everyone has the confidence to move. With #TrainersforHire, our mission is to advocate for more diverse champions of movement and challenge societal ability standards. We hope to remind the fitness industry – and beyond – that everyone deserves the freedom to move, whoever you are, however you move.’ 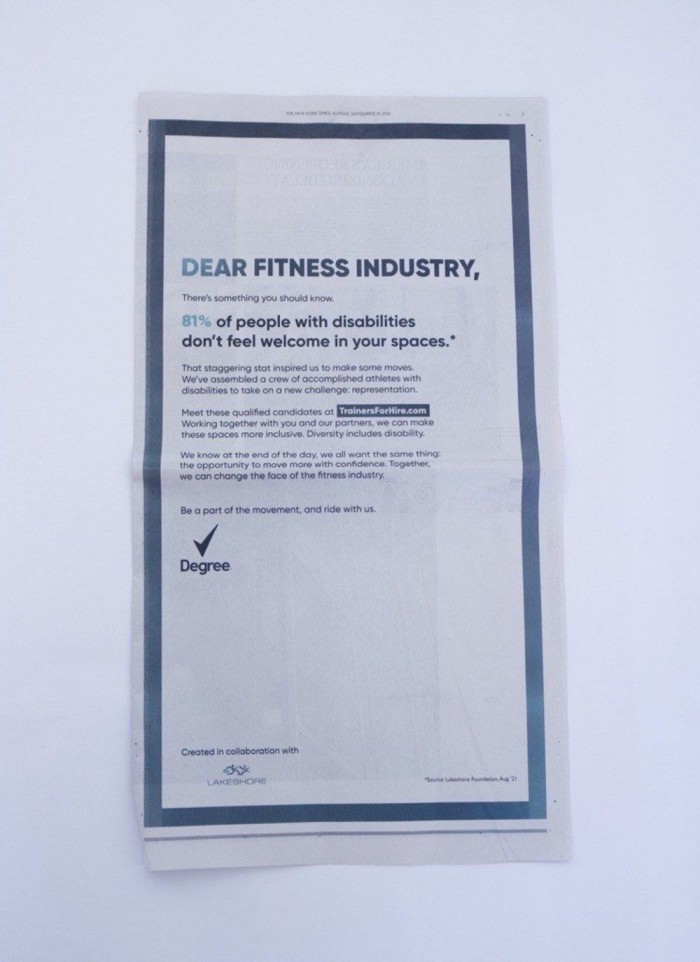