WFA has learnt today that the US Department Of Justice has announced that two international cybercriminal rings have been dismantled with eight people indicted for causing multi-million dollar losses in ad fraud.

WFA has learnt today that the US Department Of Justice has announced that two international cybercriminal rings have been dismantled with eight people indicted for causing multi-million dollar losses in ad fraud.

The operation, called ‘3ve’ (pronounced “Eve”), is being described as one of the largest and most sophisticated digital ad fraud operations encountered. Google, Whiteops and others have collaborated with the FBI to identify the threat. It’s been called 3eve as was composed of three distinct sub-operations, including hijacked IP addresses, counterfeit sites and inventory and data centre traffic.

It’s being reported that 3ve involved around 1.7 million PCs infected with malware, an array of servers that could generate sourced traffic from bots, roughly 10,000 counterfeit websites generating between 3bn and 12bn daily bid requests, created to impersonate legitimate web publishers - and over 60,000 seller IDs with digital advertising companies to help fraudsters receive ad placements and get paid.

3ve has been particularly hard to identify, report Google, as it uses tactics such as counter ad fraud tag manipulation and evasion, combined with the ability to change its codebase after each spike in activity. Additionally, 3ve has been able to acquire new IP addresses, meaning that blacklists are only temporarily able to interrupt 3ve’s activity.

WFA’s research into ad fraud (2016) has indicated that, without sufficient counter measures, the threat represented by ad fraud could be in excess of $50bn by 2025. In this report, WFA points out that ad fraud has historically involved relatively little effort and risk but considerable rewards for fraudsters.

Working with authorities and pushing for legal consequences, although time consuming and complex, were some of the more effective counter ad fraud measures outlined by WFA (below). 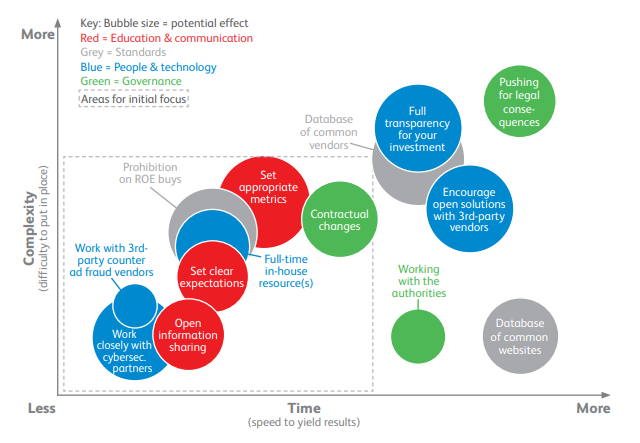 “It’s hugely encouraging to see the industry unite with international law enforcement to dismantle this sophisticated ad fraud ring. We have to change the risk/reward profile of ad fraud and this is a positive step in that direction”, said Stephan Loerke, CEO WFA.