For its sponsorship of Pride month this year in Brazil, Mercado Libre reimagined iconic kisses from history and pop culture with LGBTQ+ couples.

Working with agency GUT in São Paulo, the online marketplace reimagined moments in history as well as noteworthy kisses in pop culture, including from The Notebook and Game of Thrones.

The campaign, New Iconic Kisses (Novos Beijos Icônicos), is based on the insight that nearly all iconic kisses feature heterosexual couples. So the brand created a TVC and out-of-home featuring the reimagined content. Due to Covid-19 restrictions, real couples were sourced and cast in the film and photographs to allow close contact. 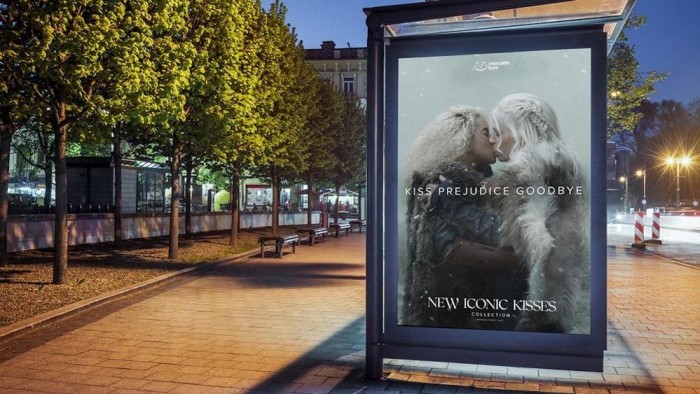 The ad ran during Brazilian prime-time TV and the campaign will feature in outdoor campaigns and installations. Mercado Libre debuted the campaign at the LGBTQ+ Pride Parade in São Paulo, which took place online again this year.

The brand has also made these images copyright free, anyone can download them from the campaign’s website.

‘Mercado Libre, as its name says [Free Market], is a brand that celebrates progress through the freedom it gives people to thrive by selling whatever they want to millions of people across the continent,’ said Bruno Brux, executive creative director at GUT. ‘With this campaign, it aims to use its reach to make the new iconic kisses as famous as the original ones, and to do so, the brand has made the images of the campaign 100 percent copyright free.’

All in / While a Pride campaign like this might not cause too much of a stir in more progressive countries, LGBTQ+ public displays of affection are still very much a taboo in Brazil. Members of the community are disproportionately harassed and made victim to aggression and homophobia. This prejudice is often put down to a deep strain of conservatism in the country and Brazil is also reported as one of the most violent regions in the world. In 2020, the country was deemed the most unsafe for transgender people by the Trans Murder Monitoring project for the 12th consecutive year.

Publicly championing demonstrations of love between LGBTQ+ couples is a courageous gesture from the brand. Mercado Libre is the largest online retailer in the country, so an act like this is likely to cause a backlash among some consumers. And while the link to Pride that gives the brand authority to act in this space may not be obvious, Mercado has in fact been an official sponsor of the São Paulo Pride Parade for several years. Considering the deluge of rainbow sandwiches and half-baked gestures we see at this time of year, it’s refreshing to see a commitment to LGBTQ+ that goes beyond Pride month.

Love for all / A vital part of this campaign is the decision to make the images copyright free. People can share the images and do with them as they wish. ‘Anyone who wants to download it, who wants to produce a poster, a mug, a T-shirt, can,’ said Thais Souza Nicolau, regional director of branding at Mercado Libre. ‘The more downloads, the more people, the more sellers using the images, the better.’ By freeing these assets of any watermarks or copyright laws, the brand ensures the campaign’s positive effects will carry on far beyond the TVCs or the out-of-home. It’s in hope that eventually the campaign will change algorithms, so that when people search ‘iconic kisses’, they’ll see more representative images. Meaning Mercado Libre will continue to contribute to the acceptance of LGBTQ+ public displays of love. For every download, the company is also donating R$1 ($0.20) to Casa1, a culture and reception centre for the LGBTQ+ community located in São Paulo.